Calcifying cnidarians or hard corals are by far the most important structure-building marine organisms in the world. They create entire ecosystems and provide habitat and substrate for thousands of different species. Today we know that more than half of the coral reefs are located in deep and cold waters. While most of these cold-water coral reefs are located in depths where researching them is difficult, at a few places in the world deep-water emergence brings cold-water coral communities close to the surface.

The channels and fjords of Chilean Patagonia are one of these places. Here, stony corals that, up till now were known from the continental slope down to greater depths, can be found on hard substrata as shallow as 7 m and form an important part of the hard bottom biocenoses.

The fjords and channels of Chilean Patagonia are characterized by the presence of three scleractinian corals, the pseudo-colonial coral Desmophyllum dianthus and the two smaller species Caryophyllia huinayensis and Tethocyathus endesa (Figs. 1 to 4). In the three northernmost fjords Reloncaví, Comau and Reñihue they form dense banks starting in 15-20 m depth, in the Pitipalena Fjord banks can be found at some sites below 40 m depth. 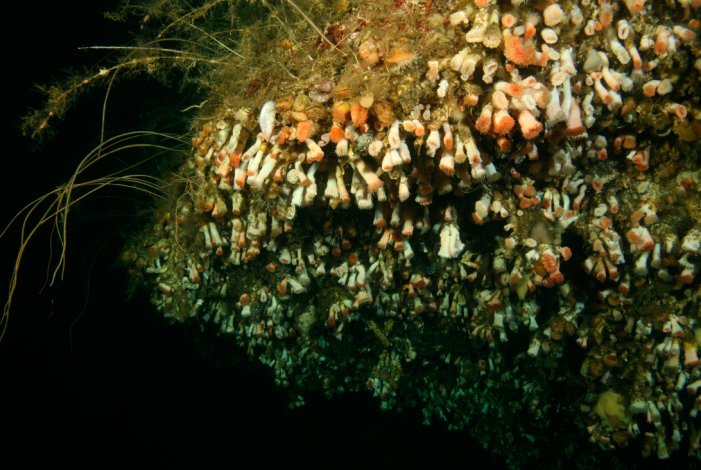 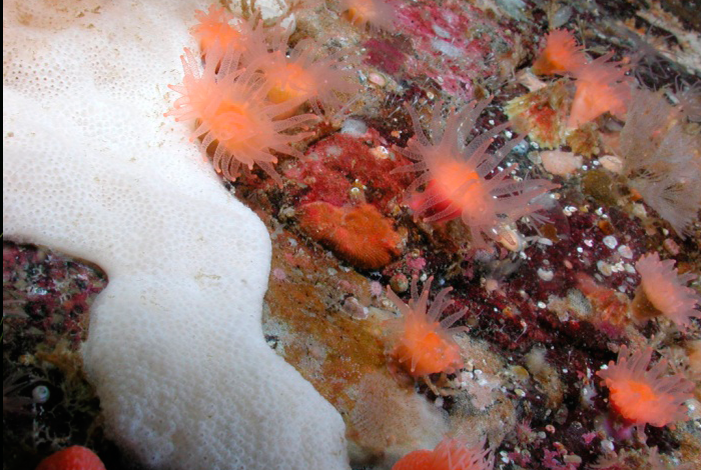 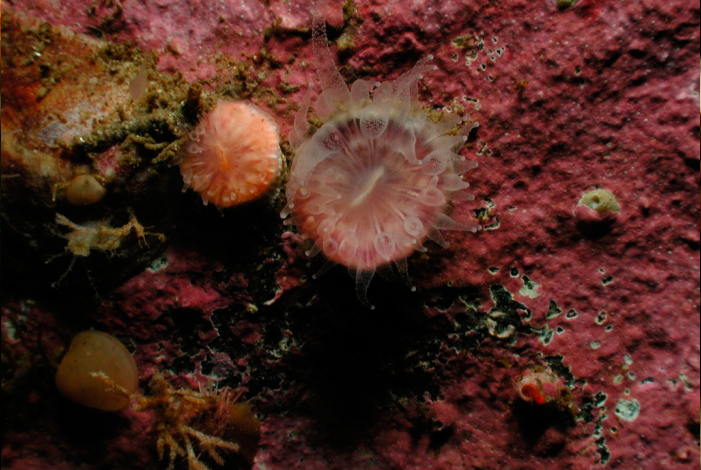 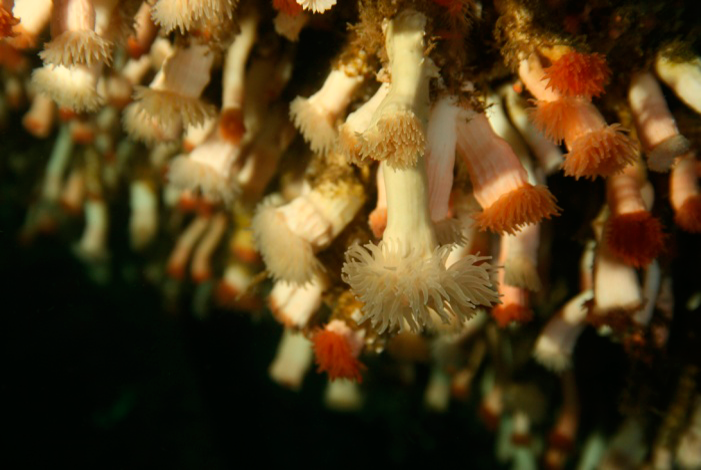 Other studies have shown that D. dianthus tolerates relative low pH using an internal pH up-regulation which is being studied by G. Schmidt et al during the PACOC project. Studies on age and growth indicate that individuals live up to 100-200 years. Several genetic studies tried to resolve genetic differences at population level (Addamo et al., in process), but more studies are necessary in the future. Due to the technical difficulties that are generally related to deep water coral research, advances are slow and only fragmentary knowledge on their ecology, physiology, reproduction and mortality is available.

In May 2012 during our regular diver-based monitoring of Comau Fjord (see Fig. 5; where the Huinay Scientific Field Station is located) we discovered that all specimens of Desmophyllum dianthus had died at one of the long term study sites (Figs. 6). The area of the mortality extends over at least 15 km. 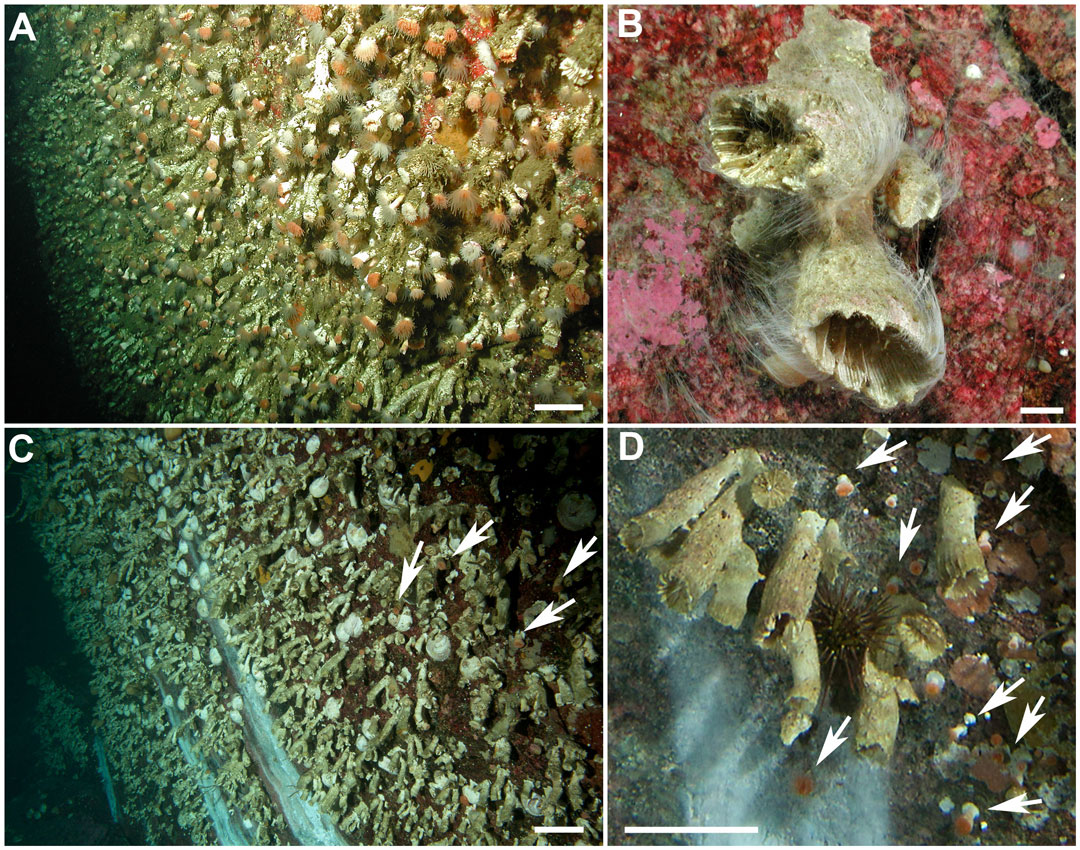 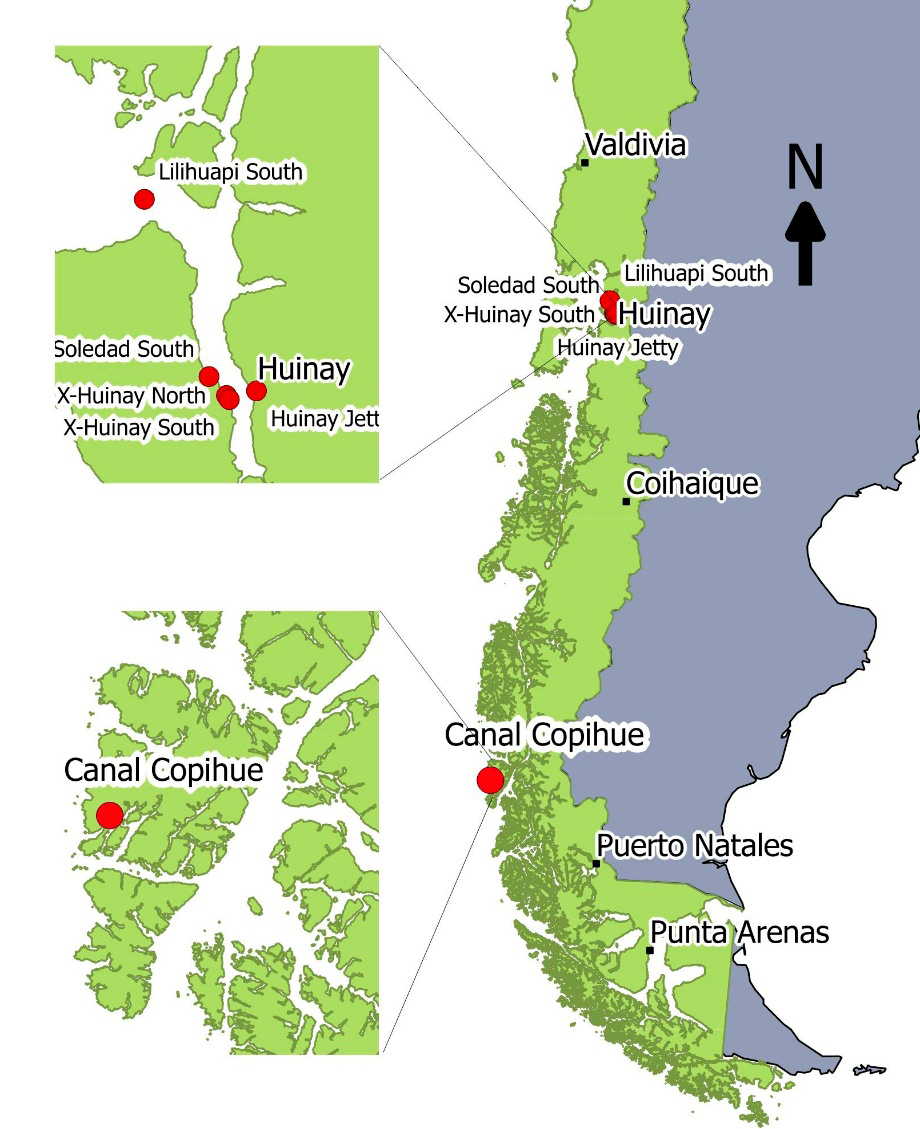 Cases of mass mortality in tropical shallow coral reefs are well documented. Also for deeper cold-water coral reefs mass mortality has been the subject of studies and publications. For tropical reefs elevated temperatures and mechanic destruction (by storms or through direct human impact) has been identified as the most important mortality factor.

For cold-water corals mechanical damage, mainly due to bottom trawling, is the main threat. However, there exist a number of other reasons that have been documented to have caused mass mortality as well: Ocean acidification is predicted to become the most important cause for cold-water coral mortality, especially in deeper habitats. The fjords and channels in Chilean Patagonia are known to have comparably low pH in comparison to other marine areas. Nevertheless, it is expected that the mortality through climatically driven pH shifts would have a slow, gradual and wide-spread effect on the corals, which does not fit with the sudden and patchy death of the corals e.g. in the Comau Fjord.

Diseases are known to cause mass mortalities in tropical Scleractinia (hard corals) and have recently also been documented in cold-water gorgonian corals but generally cause slower and less patchy mortality than observed in the Comau Fjord. Due to the very limited number of places where cold-water corals exist close to the surface and due to their comparably recent discovery, there is no information available that deals with mass mortality of cold-water corals in shallow depths.

In 2012, high levels of methane and sulphide were measured in Comau due to elevated activities of cold seeps.In addition, through eutrophication from intense, high impact aquaculture, the primary production in the last 20 years has at least doubled (Mayr et al., 2011) and results in stronger and more frequent algae blooms followed by hypoxic events. Since benthic organisms are more susceptive to hypoxia when under influence of elevated methane and sulfide concentrations, the hypoxia after a strong algae bloom probably killed the corals (Försterra et al., 2014).

Ongoing studies look at the three coral species and their reaction to hypoxia (Castrillón et al., in preparation).

Fig. 7: Chemotrophic bacteria patches at the dive site X-Huinay, were the mass mortality of Desmophyllum dianthus was observed in 2012.

In some high current channels of the Central Patagonian Zone, the hydrocoral Errina antarctica can reach densities that have reef-like characteristics (Fig. 8). These coral-made habitats are unique in the world and of outstanding importance for the regional biodiversity.

After the scleractinians, Stylasterinae (Cnidaria, Hydrozoa) are the next large group of calcified
cnidariansin species number. Of the approximately 250 species described worldwide, most live between 200 and 500 m depth. Nevertheless, comparably few publications deal with stylasterids. The stylasterid coral Errina spp. have been identified as key structural species in Antarctica, the South West Atlantic, New Zealand’s fjord’s, and in southern Chile’s Patagonian fjord’s. The hydrocoral Errina antarctica is distributed around Southern South America and along the Scotia Arc, Antarctica. It is known to be fragile, slow growing and easily damaged by divers or fishing gear. No information is available on temperature or salinity tolerances. 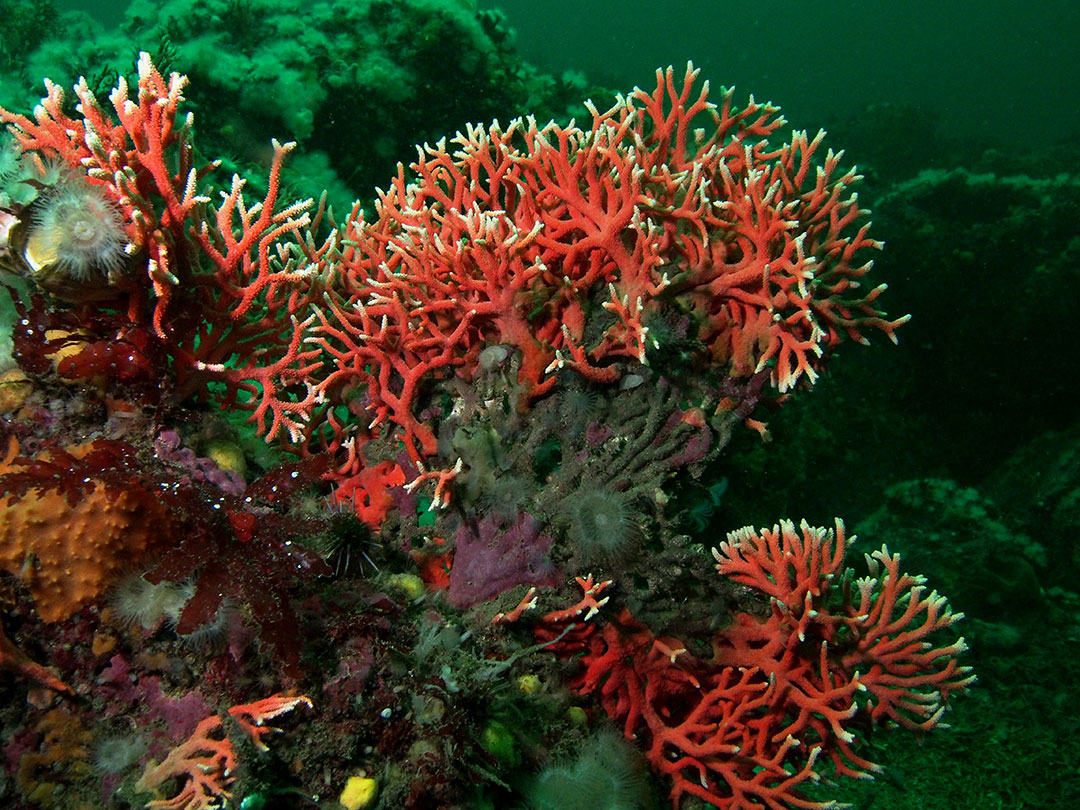 In order to investigate, equipment was left in place to monitor the current speed and direction, and water temperature and various depths. We also installed recruitment plates to take a closer look at what might colonize a fresh surface in Canal Copihue. Finally, we installed what we call “fixed-frames” which is a 40cm by 40cm square marked out so that over time we can continue returning and photographing the exact same spot.

Divers will return to these sites in July 2016, September 2017 and December/January 2017 to collect data and the site.

Check out our expedition blogs for more details about these trips!