Designing a network of marine protected areas for Chilean Patagonia

Despite increasing studies over the last decade, data on marine benthic invertebrates of Chilean Patagonia are still lacking throughout large parts of the fjord region. The Huinay Scientific Field Station (HSFS) together with scientists from Chile and around the globe have been working towards filling this gap in knowledge, compiling an extensive database of known species’ presence points and oceanographic data.

With an estimated coastline of 84.000 km, gathering such information is costly and time consuming, as many areas of Chilean Patagonia remain unexplored. Poor knowledge coupled with increased industrialization activity within the fjord region have created a need for rapid assessment of species distribution patterns. This is of a high priority to understand and sustainably conserve essential ecosystems. Species distribution modelling (SDM) is one way of rapidly filling these kinds of knowledge gaps. SDMs use abiotic information (environmental factors) and biotic occurrence data (presence-absence locations) to predict the relative likelihood of occurrence or the relative occurrence rate of a species over a pre-defined geographic area.

The HSFS has created SDMs using the maximum entropy algorithm (MaxEnt) for 215 benthic invertebrates in Chilean Patagonia. These models are then used in MARXAN, a decision support software for sustainable conservation planning and reserve system design.  Using an algorithm, MARXAN models the ‘costs’ of maintaining different protected area scenarios based on conservation objectives. MARXAN then outputs a series of possible reserve sites that either are based on pure ecological needs, or in addition also include social and economic needs. The goal is to achieve the maximum conservation of biodiversity for the smallest possible cost and within a reasonable area. HSFS is exploring the use of MARXAN, how it works and the validity of its outputs, as a prospective tool for identifying various MPA scenarios in Chilean Patagonia.

This project is carried out in cooperation with several NGOs and the ministry of environment. 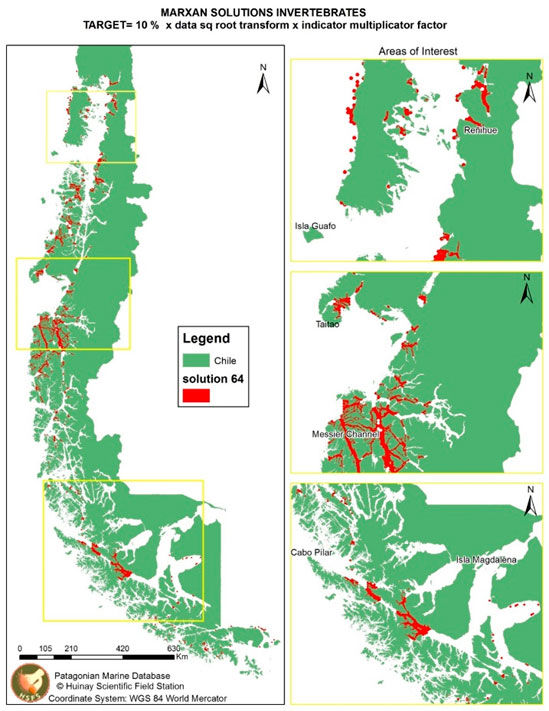 Projects that are feeding and fed into this major project are: